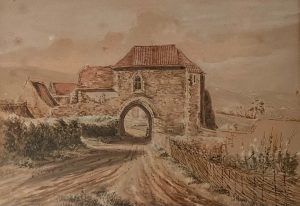 Dover College was founded on 15 September 1871 by a group of local businessmen, led by the Mayor of Dover, Dr Astley, who considered that it would be beneficial for the town to have its own public school.

The College sits in idyllic surroundings in the grounds of a 12th Century Benedictine Priory.  The first 15 boys occupied St Martin’s House under the guidance of the first headmaster, Canon William Bell. Bell was a strict disciplinarian. His energetic wife, who cared deeply for the boys, looking after all their day-to-day needs, balanced his huge presence around College. Mrs. Bell died young, in 1892 the clock tower was added on to the Chapel in her memory.

During Canon Bell’s 21 years as Headmaster, the College grew substantially. Two new boarding houses, the old Priory House and School House, were added in 1877 and 1881 respectively, new classrooms were built, and the Priory Guest House – used as a barn since the dissolution of the monastery in 1535 – was restored and consecrated as the College’s Chapel.

The Refectory and the Gatehouse, the two other original 12th Century buildings, both in a considerable state of decay, were renovated and brought into use by the School within a few years of its foundation.

In 1892, the Reverend William Cookworthy Compton succeeded Canon Bell as Headmaster. Compton had been a Housemaster at Uppingham. In 1895 the fives courts were built, Middle Ground was levelled, and by 1896 the school had reached 200 boys. More development followed. The tuck shop was added in 1898, the original sanatorium in 1901, and in 1902 the Science Block was built. At this time, no less than 18 Old Dovorians were at Cambridge University.

Compton resigned his Headship of the College in late 1910 and was replaced by F de W Lushington. It was during his time as Headmaster that World War I began. In 1915, Lushington decided that his time would be better spent serving his country than the College and so he left Dover College to become an Army Chaplain.

During the two world wars, many Old Dovorians saw active service.177 former pupils of the College died in action in the First World War, later 102 died in the Second World War. Many of these former pupils served their country with distinction.

Records show that during the First World War 50 Old Dovorians received the Distinguished Service Order Medal and 76 were awarded the Military Cross. Old Dovorians were also mentioned in dispatches on no less than 155 occasions. Lt Commander A L Harrison, who was killed in action at Zeebrugge in April 1918 aboard H.M.S. Lion, was awarded the Victoria Cross.

Of all the feats of bravery and heroism, none is better known than that of Captain Wilfred “Billie” Nevill who led the famous football charge in July 1916 at the Battle of the Somme. Whilst he was a boy at Dover College, Captain Nevill was an excellent sportsman. He had completed a year of study at Cambridge University before joining the army. He was killed by a sniper at the Somme whilst leading his men into battle, aged only 22.

The names of all the Old Dovorians who gave up their lives in service for their country are recorded on Honour Boards on the south side of the College Chapel.

Lushington’s replacement was in 1915 was W.S. Lee, one of the finest Headmasters of Dover College. Lee was a boy, an Assistant Master and, after his period as Headmaster, a Governor at Dover College. Although relatively small, he was a good athlete (he won a “Blue” at Oxford) and a great character. He died at the age of 95. Always unfailingly courteous in his manner, he lived the life of a liberally minded Christian gentleman and was highly respected by all who knew him.

Lee took over at a time of falling numbers and when the College itself was under serious threat from aerial bombardment. In August 1917, The Close was damaged during an air raid and the decision was finally taken to evacuate the College from Dover. The College moved to Leamington Spa. On its return to Dover in 1919, there were only 150 boys in the College. Nevertheless, in 1920 Crescent House and Leamington House were opened, the latter so named as a tribute to the spa town, which had sheltered the College during the Great War. 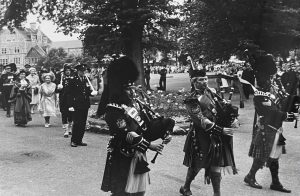 In 1922, ownership of the College passed to a Trust set up by the Old Boys and in 1923, a Royal Charter reconstituted the College. Indeed, throughout its history Dover College has had linked with the Royal Family. In 1909 Canon Compton was presented to the Prince of Wales, later to become George V. In 1921, Lee welcomed to the College the Duke of York, later to become George VI, and Her late Royal Highness Queen Elizabeth the Queen Mother was he College’s last Patron.

During the Second World War, the College was once again evacuated, this time to Poltimore House in Devon. On its return in 1945, the College had only 168 boys and the grounds and buildings were in serious need of repair. Renwick rose to the challenge magnificently. The College was successfully re-established in Dover and numbers slowly began to recover.

Renwick’s successor, ADC Peterson, was Headmaster for just three years but he made one very significant and innovative change to the College – in 1958, he opened an International Faculty. The College has subsequently maintained strong international links. Today it has a modern, well-equipped International Study Centre opened in 2001. Later in his career, Peterson was instrumental in creating the International Baccalaureate – an examination system now used worldwide – and subsequently became Professor of Education at Oxford University.

During the era of Headmaster Tim Cobb, the Sports Hall and the Kent Block were added and the decision to admit girls into the College was taken. In 1974, by which time David Cope was Headmaster, Dover College became one of the first English Public Schools to go fully co-educational. Girls were introduced into Duckworth House and in 1993 into St Martin’s House, the College’s original boys’ boarding House. David Cope was a young innovative and dynamic headmaster. Under his leadership, the College reached its largest size of 420 pupils.

In 1997, Howard Blackett took over the reins and successfully steered the College before taking up post as Headmaster of The Royal Hospital School in Ipswich. In 2004 Stephen Jones, a Housemaster at Radley, was appointed. During his time, the school saw the creation of a new music department, Tallis, and the renovation of Menzies Hall. He moved to St Edward’s Oxford as Warden in 2011.

Gerry Holden, who had previously been Headmaster of Rendcomb College, started in September 2011, helped to develop the strong family atmosphere for which the College is famed, retiring in December 2014.

In January 2015, Gareth Doodes joined Dover College as Headmaster, and during his time, the school saw a refreshed management structure, a successful ISI inspection, the launch of a new development plan, Project 150.

From September 2020, Simon Fisher joins the College, bringing a wealth of academic wisdom from his time at Worth School, Sussex. 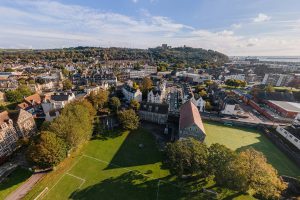 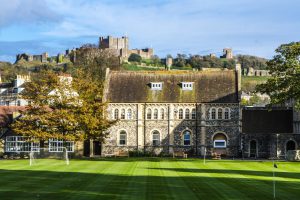 Welcome From The Head